“The great thing about improv is that you do a scene – then it's over.” 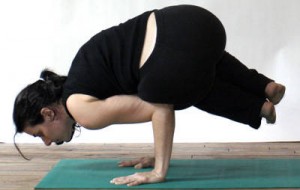 I recently started taking a beginnier's improv class at The Washington Improv Theatre this week my improv teacher said something that I think parallels a lot of what goes on in yoga. In improv, you improvise a scene and characters to be in the scene. If the scene or a character doesn't work out – don't cling to it and try to make it work – just move on and create a new one.

Nothing is permanent – if you try a pose and it doesn't work out – it's over. Vinyasa yoga is the best example of this as one flows from one pose to the next through the sun salutations. Last week Iin Flow yoga Jasmine encouraged me to try side crow pose. It seemed totally impossible! I tried it, and basically failed – but I had to try. It was over and now I had one more attempt under my belt.

In life – if you're at a job you don't like, it's not forever. If you're experiencing pain or sadness, know that it will pass soon. I just discovered in googling “nothing is permanent” that Buddha said it. And then Charlie Chaplin said, “Nothing is permanent in this wicked world – not even our troubles.” Wise men.

Author: Margaret is a yoga enthusiast who just began practicing at Yoga District.