So, there is definitely a yoga body type. It's displayed in yoga magazines and in ads for yoga clothing and gear (which is now sold just about everywhere, including the grocery store!) You know the type, a long lithe body, flat stomach, long legs, shiny hair in a pony tail. I've seen it so much I kind of assumed that's how yoga originated, skinny, fit girls in tight pants and cute tank tops. 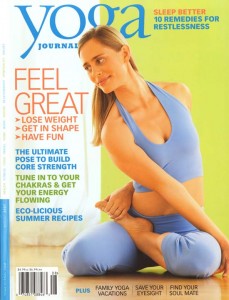 But recently I started reading Iyengar's guidebook to yoga. B.K.S. Iyengar is a 92-year-old Indian yoga guru who founded the practice known as Iyengar yoga. It encompasses most of the basic poses used in Yoga District classes.

What really blew me away is the photos of Iyengar's Indian students in his book. They're girls of medium height and weight, wearing big shorts and t-shirts. Their outfits are not form-fitting in the slightest. The shorts look more like men's swim trunks.

It just made me think of how much we have Americanized this ancient practice. And it's not a bad thing, we've made this holistic and powerful practice available to masses of people who would not otherwise encounter it. I only wish to question the yoga body type we idealize.

I mentioned in my last post a Tweeter called @curvyyoga. Also known as Anna, she founded a studio specifically targeted toward larger people who are interested in practicing yoga.

“For over ten years, Anna practiced yoga and was, more often than not, by far the largest person in her class.  Despite being determined to continue practicing yoga, she often faced ignorance and feelings of marginalization.  As she sought connection with others who were teaching and practicing with curvy bodies, she found few allies.” (Curvyyoga.com)

I think Anna would have felt at more home at Yoga District. The classes are full of all types of people, and all types of yoga clothing. It's not pretentious or exclusive – it's core mission is to bring yoga to everyone. It saddens me to hear of people who would like to practice yoga, but don't think they're skinny enough, or flexible enough – it's not about that! It's about taking an hour, a class to get in touch with you body and still your mind.