Celebrating Black Yogis: Then and Now 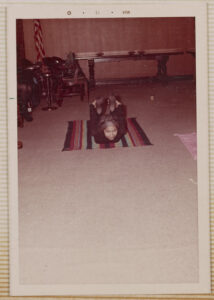 The origin of the history of black yogis isn’t a complicated one.

Like many yoga practitioners in the U.S., black people turned to yoga to practice physical, emotional, and spiritual self-care.

However, in the context of America’s history, the story of black yogis is layered. It’s a story of now and then.

Before I get into the “then,” let me start by framing its history. The Civil Rights Movement began in the late 1940s. President Harry S. Truman issued an executive order ending segregation in the military in 1948, followed by the desegregation of schools in 1954. But the fight for actual desegregation dragged on until the late 1960s, and the struggle for equality carried on much longer (1).

When black yogis began practicing in the early 1950s during segregation, there were two Americas. It’s these two separate Americas that, I believe, led to the common misconception that when yoga was growing in popularity in white communities in the United States, it wasn’t also increasing in popularity in black communities. Simply put, mainstream media was not covering the stories of black yogis.

As early as the 1950s, black people were practicing yoga and embracing the concept of non-violence, also called ahimsa. Many creatives were under excessive scrutiny about what could be  perceived as socialist or communist tendencies. Yoga was not exempt from this scrutiny. Nevertheless, renowned black creatives such as Eartha Kitt and Herb Jeffries became yoga practitioners (2, 3). Leading up into the 1960s and 1970s, more and more black artists became practitioners, including saxophonist Sonny Rollins, and the musicians John and Alice Coltrane (4, 5, and 6). Alice later learned the Vedas and opened an Ashram in California in the 1980s (7, 8). 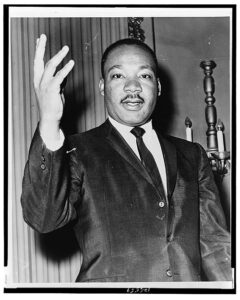 The practice of yoga was also closely aligned with the Civil Rights Movement. Ghandi was an inspiration to Martin Luther King Jr., and King adopted the practice of ahimsa as the basis of his non-violent approach to civil rights (9, 10). Based on her niece’s recommendation, Rosa Parks began practicing yoga at an older age. It helped her deal with the anxiety and stress that were closely linked to her work as an activist (11).

In an Ebony magazine article in 1975, civil rights leader Angela Davis talks about her experience practicing yoga when she was unjustly imprisoned for 18 months in the early 1970s. “Just the physical part was a help, in my case, because I couldn’t leave the cell for regular exercise,” Davis says (12). She saw yoga as a civil rights tool: “ I have never used yoga as an end in itself, but merely as a means of preparing myself for a more effective struggle. As a result of yoga I am more energetic. I am able to go and appeal to people and to organize them to do the kinds of things that are vital to our freedom” (13). 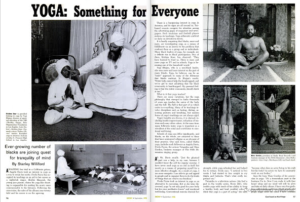 The same Ebony magazine article, entitled “Yoga: Something for Everyone,” points out that yoga wasn’t just for black celebrities, artists, and activists, yoga is for everyone. This concept is best exemplified by former actress, Thelma Oliver, now Krishna Kaur, who began studying yoga under Yogi Bhajan in 1970 (14). Kaur established the first Yoga Center in South Central Los Angeles and founded Y.O.G.A. for Youth, a nonprofit that focuses on at-risk youth and the development of yoga programs for schools and juvenile detention centers (15).

Today, many of the motivations for practicing yoga among the black community remain the same. Racism is still taking its toll and yoga remains a powerful tool to promote physical, emotional, and spiritual well-being.

There has been a lot of progress in the Civil Rights Movement, but the fight for equality for black communities continues. Especially when it comes to spaces that many subconsciously, or consciously, view as white. Seventy years later, representation of black folks in the yoga studio feels just as limited and underreported in mainstream media.

However, there is some good news:

To keep the momentum going, we must acknowledge there’s still a lot of work to do undoing the perceived barriers of race and socioeconomic class that have become synonymous with yoga in the United States. To me, a good way to start is by celebrating the black yogis of today and yesterday. By telling their stories we begin to break down the American narrative of who yoga is for and boldly embrace the ideology that “Yoga is for everyone.”

A Brief History of Black Yogis in America Pt.1 was also a helpful research resource for this blog post (17).