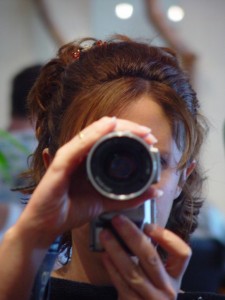 “C’mon, little guy, hold still!” a child commanded toward a frantic African shrew in a display case at the zoo.  “I just want to get your picture!”  The child toted a digital camera that was set and ready to shot an automatic flash photo, but the subject in question couldn’t stop pacing about in its case.  “I don’t think he knows how to hold still,” the child’s mother stated.  “Let’s move on to another animal, why don’t we?”  But before they did, the child snapped a blurry photo of the shrew, just because.

What makes us feel the need to document every sight?  Since when have viewfinders and screens become our drishti, the point of our gaze?  Osho dubbed this phenomenon as “Kodakomania”.  There’s nothing wrong at all with the use and embrace of this technology, but when the use of cameras and computers become more of a habit, they also become a bit of a hindrance.  The focus becomes more about getting a satisfying image rather than observing the subject itself.

The zoo is an interesting place to notice this…when a lion springs into action, everyone immediately reaches for their cameras to catch the moment.  It’s a tempting thing to do, because, really when do you see a lion in movement?  Or any animal besides a squirrel or a starling, at least in this city?  But to have the habit and desire, which is becoming almost instinct, to take a photograph of the moment is really takes away from the moment itself.

Establishing presence is a strong focus in yogic practice.  How do we find the balance between life on-screen and off-screen?  It’s tough to say, as situations vary from person to person.   Perhaps reflecting on this topic could help mediate a balance of some sort.  First off, what draws us to the urge of taking a picture of something?  The subject itself.  Its essence captivates us, and therefore, we feel a need to capture it, as to remember in some way and to share.

But there is much more to notice from a subject or an experience that can be seen and appreciated without the use of a camera.  Ever seen the movie “The Girl With the Pearl Earring”?  There’s a scene where she’s staring at the sky with the painting master and he asks her what color the sky is.  She only gives him one color, but he says something along the lines of how there’s much more than that, yellow, white, grey, and blue.  By taking a moment to see something for more than it is, you’ll notice all the details that come with it.  That in itself is a beautiful way to use of establishing presence and drishti.