Sometimes I think that the Sympathetic Nervous System doesn’t live up to it’s given name.  Instead of showing compassion, the SNS sometimes acts a little anxious, and with it’s own agenda, sends messages without much concern for the the well-being of the rest of the body.  Do I hear a boy crying wolf?  I guess you’d be on edge too if you were responsible for mobilizing the force of flight-or-fight response, an inherent tool needed for survival.  Sometimes though, it seems like the SNS is just a little too trigger-happy, ready to jump into action when the body doesn’t necessarily need it to, which creates all sorts of problems. 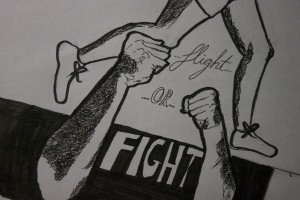 Luckily, the Autonomic Nervous System has another subsystem, the Parasympathetic Nervous System, which balances and checks the SNS.  The PNS takes care of the body’s “rest and digest” functions and regulates the internal organs.  Lacrimation, Salivation, Urination….check, check, check.  Take note though that the PNS and the SNS are not antagonistic; they work in opposition, but they really compliment each other, much like yin compliments yang, and vice versa.

Now, don’t get me wrong, I’m incredibly thankful for the unyielding vigilance of the SNS, because really, who knows when trouble might actually arise?  But truth be told, it’s easy to rile up those flight-or-flight neurons without needing to tap into that resource.  Over-thinking and stress takes a toll on the body and the mind, and especially on the nervous system, which often acts like it has a mind of its own.  If it feels like its under attack, it will send for backup, and there’s a lot of power that’s jam-packed into hormones like adrenaline.  If your body doesn’t actually need to kick into flight-or-fight mode, then all those recently released hormones are over-working and effecting your well-being without any reason.

It can be extremely difficult realize when your nervous system is over-reacting, because its regulates unconsciously.  But if you are somewhat upset or stressed about a situation and feel like you might “fight or flight” and you just don’t know why, take a step back and remember there’s another side that’s ready to “rest and digest”.  It’s important to respect and be aware of these two systems and their functions in order to maintain a healthy balance in your life.