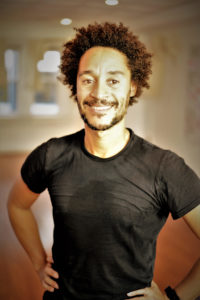 No two yoga classes are identical, but sometimes something truly unexpected may occur. What if, during your yoga class, one of the students becomes ill? How do the yoga teacher and the rest of the class help that person in need? This is exactly what transpired during one of Andrew’s Yoga District classes.

When a student gets sick in class: stay calm, check their vitals, and, if necessary, call 911. Do your best given the circumstance.

Read on to find out what happened in Andrew’s class and learn how he maintained a safe space for all–even as an emergency situation unfolded.

Disclaimer: I have been first aid certified for 26 years–since I was 16. I am also qualified to teach first aid. When I had an office job, I was the health and safety officer. Imagine if I had no idea what to do to help the ill yoga student? 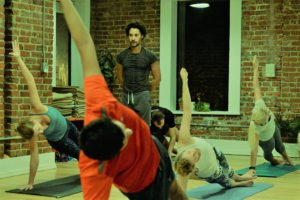 After receiving permission from the student, I wanted to share an incident that occurred during one of my recent classes. I believe it was an important learning opportunity for me and could be helpful for others. Here’s what happened:

In the middle of class, I noticed a student start to roll up her mat with a look of distress on her face. It seemed odd, but not completely unheard of as I’ve had students leave mid flow before. Per usual, I made my way to the student so I could assess the situation and also take a name.

The student was in a state of distress, saying she needed to leave. She wanted to get out of class because she felt unwell. I suggested she just lay at the back of the room. She was insistent about leaving, but I gently suggested she sit for a moment to first cool down. In no time at all, she was on the floor, reaching for the trash can, removing the lid, and sticking her head in it.

Helping a Yoga Student in Need

Now I had a sick student in a room of 25+ people that were still being directed in asana because class hadn’t stop. I was worried about her safety and the health of the class. Also, I was concerned for her dignity. I know I would not want my friends to leave me with my head in a trash can in front of a crowd.

I suggested we go to the restroom. This involved walking the entire length of Bloomingdale studio. I was still teaching. We almost made it, but she collapsed and I had to support her to the restroom. At this point, my full focus needed to be on the ill student. Thankfully, an experienced teacher, who I trusted, was a participant in this class. I yelled “Yassah, you teach now!” Because she is a wonderful teacher she did what needed to be done–seamlessly and without drama. (Thank you again,Yassah, and to the yoga student who helped me carry the sick student into the back room.)

I made sure that the unwell student was comfortable, lying on her back with planted feet. Then I stepped back into teaching the rest of the class. I periodically checked on the sick student. She was noticeably getting much better.

As we came to the closing sequence, I rolled out the student’s mat back out, where she had practiced, and invited her to come finish class. It felt like it was the right thing for the student, the class, and myself. It was also important to assess that student’s ability to function.

Several things have been on my mind about that incident:

Then on the flip side:

A Safe Space for All to Practice 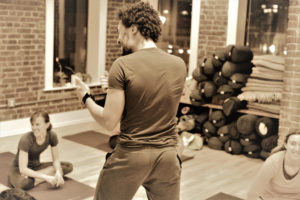 I wanted this student to feel respected with her needs and feelings heard.   As the yoga teacher, I decided to direct the situation towards safety.

Nonetheless, we negotiated a safe space that I believe resulted in the best outcome for that situation. I stayed calm while looking after the ill student and the class but inside, I was figurative making panicked somersaults.

I wanted to share this experience just in case it could benefit another teacher or student in a similar circumstance. It could have gone a multitude of ways. I was lucky the student accepted my suggestion to stay. If the event had gone another way, this could be a very different story.

Thank you for reading and I hope it adds to our collective experience and knowledge. I am always open to suggestions of better ways to handle situations. I did my best in the moment but can always try for better.