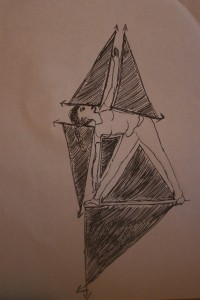 Have you ever taken a try at Triangle, or Trikonasana?  It’s a pose that can expose you to the power of applying angles, corners, and shapes to stretching.  Trikonasana taps into three targeted areas, the shoulders, torso, and hips, and turns the extremities into expanding axes.

The hips, the base of the spine, and the lower half all benefit from practicing Trikonasana.  Being a standing pose, the legs serve as the foundation, so it’s important to have solid footing yet enough space between each foot to achieve full potential from the stretch. Blocks come in handy with this pose, so feel free to set one up by your front foot.  The first angle and imaginary triangle starts on the floor with your feet.  Let’s put our right foot forward on the mat with both feet pointing out straight and running parallel.  Then turn the left foot out to about 60 degrees, or to a ten o’clock position.  (Degrees and clock-references vary).  Make sure your heels are still on the same axis, they’re keeping you in firm position!

The second triangle shape forms with your pelvis.  Now that your feet are in position, your legs are like opened scissors, holding a wide stride.  Keep your pelvis facing forward for a moment, as you would in warrior pose, just to be aware of your pelvic plane.  Trikonasana is a great hip opener.  You’ll feel your joints activation once you swivel them to be parallel with your heels.  If your hips and heels stack up though, that means your stride is too short!  Don’t be afraid to slide your front foot forward a bit more to make a wide triangle!   You’ll want to make sure that your front leg is straight and diagonal.  This pose is full of oblique planes!

It’s time to activate your arms.  Let them rise into a T-bar, again, like you would in warrior pose.  Now let your torso move forward so that it hovers over your extended right thigh.  Drop your right hand to the ground or to a block on the outside of your right foot, and extend your left arm and palm skyward. Your arms should now be in a vertical axis, creating a series of angles between hips, shoulders, and the neck.  Make sure your head doesn’t hang, as it should be on the same plane as your torso, but feel free to look skyward.