New science backs up the healing properties of yoga and meditation.

If you’re a regular or even an intermittent yoga practitioner, I’m sure you can come up with a long list of benefits to getting on the mat: reducing stress, gaining a sense of community, improving posture and confidence, toning muscle and promoting general happiness…just to name a few. And we’re always hearing stories about yoga students whose practice has kept them healthy and active well into their life.

But what if scientific research could actually show that yoga can improve your health and lengthen your lifespan? Now there is more than just anecdotal evidence of this, with researchers discovering proof that these practices have an observable, biological effect on the cellular level in your body. 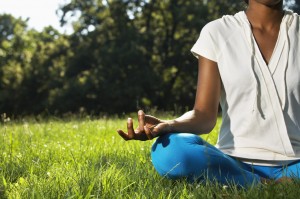 Many of us are familiar with the idea of the fight-or-flight response. It’s the natural, biological reaction that our body has in stressful situations in which we’d ordinarily need to either flee or fight back. During stressful situations, this response kicks in, putting our nervous system into overdrive. But according to recent research published in Plos One, activities such as deep breathing, repeated mantras, and ignoring intrusive thoughts, all components of physical asana practice as well as other meditation techniques, can produce changes in gene expression that exactly counteract the negative effects of the fight-or-flight response.

These gene expression changes were connected to improving energy metabolism, mitochondrial function, insulin secretion, and telomere maintenance, as well as turning off gene expression involved with inflammation. All of this could add up to some major improvements in overall health, lowering blood pressure, fighting cardiovascular disease, and possibly helping to ward off some types of cancer that are exacerbated by stress.

The study showed that the longer you practice these techniques over time, the more pronounced the positive side effects become; the recommended meditation time was twice a day for at least 10 to 20 minutes.

Yoga District offers several meditation classes throughout the week at various locations if you’re interested in exploring this or would like to learn breathing techniques you can try at home. And the next time you run into a yoga skeptic, pass along some of the data and tell them to give it a try sometime.