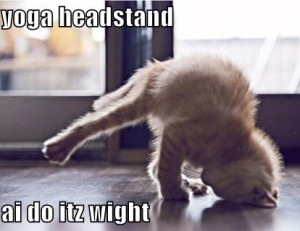 I am a new addition to the Yoga District family, after recently realizing my week long streaks of cocktail lusting and late night McDonalds runs had finally taken a toll on my once toned physique.  I had taken some yoga classes in the past: Bikram, Hatha, and various classes at Washington Sports Clubs.  I had at least taken enough to where I thought I deserved my own Yoga mat, even though it would usually end up in the back of my closet after a couple weeks.

When I started taking classes at Yoga District, I noticed how all of the classes had numbers by them (1, 1.5, 2, 3), which I had to admit, threw me at first.  Since I had taken some classes in the past, I decided that I was at least a 1.5 or a 2. I signed up for my first class with Caroline D. for Yoga 1-1.5, thinking to myself “The numbers are low enough, maybe I can show off my skills a little bit”.  Let me tell you, there is nothing more humbling that being in a class that you think is a very basic yoga class and being almost the only one in the class that is not at in head stand.   The class ended up surprising me in all of the best possible ways.  After getting over the mild embarrassment, I listened to Caroline D.’s instructions closely and was able to hold poses that I had only pretended to do in the past.

It was at that point that I realized that the Yoga “practice” I had experienced before was obviously very cookie-cutter and lacking the authenticity that Yoga District seemed to offer.  After just a few classes, I have noticed my strength and flexibility have increased.  I have graduated myself to a 1.5 finally and treated myself to a Manduka yoga bag.  Next stop, level 2 and a new mat.  Of course, I’ll be donating my old one through the Yoga Activist Mat Donation Project!