There Is No Need to Be Nervous about Dharma Yoga 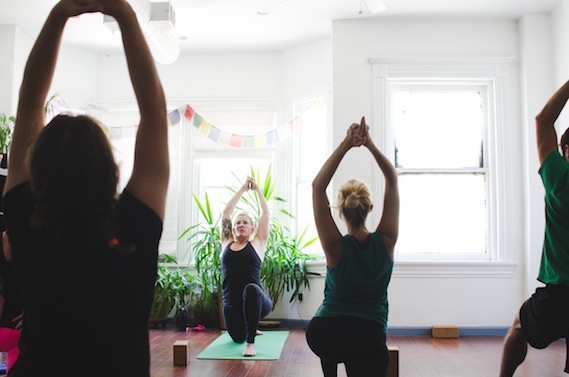 Adam Frei, an instructor at the Dharma Yoga Center in New York, came down to DC in mid-January to teach a series of workshops at Yoga District. For those just starting their practice or less familiar with the spiritual aspects of yoga, Dharma might seem intimidating — but it has benefits for every kind of person, Frei says.

Longtime yogis and Dharma-newbies alike crowded into Yoga District’s 14th Street studio for a series of workshops with Frei. The first class of the day, Maha Shakti, was focused on yoga’s asanas, or postures, but it started with something a little different: Frei walked in carrying a large, red bag that looked like it might be used to carry pizzas. Inside was a harmonium, or Indian pump organ, which Frei played during five minutes of chanting at the opening of class. For the next two hours, participants chanted, meditated and moved through Dharma yoga’s traditional physical exercises together, finding peace even through the construction noises on the street outside.

For people who are new to yoga, or even just new to Dharma, this practice might seem a little intimidating, especially if you don’t know the words of the chants, or if you’re unfamiliar with the spiritual aspects of yoga. But Frei, who has been practicing yoga for more than 15 years, says anyone can find benefits in Dharma.

“But the true goal of yoga is self-realization,” he added. “There are so many people who have gotten involved with yoga from the exercise and fitness world, from the dance world — their focus . . . maybe excludes some of this.”

Dharma yoga is based on the teachings of Dharma Mittra, which are based on the classical practice of yoga. Mittra once photographed himself doing 1,350 different postures in an act of devotion to his teacher; Dharma classes often involve moving through sequences of these poses. But it’s also yoga of the mind, involving chanting and philosophical reflection as a pathway to spiritual enlightenment.

Especially for those who are starting to explore yoga, Frei said, it’s worth trying Dharma. “Just try to be open to it, in the same way you would with any other kind of cultural experience,” he said. “You might try going to a church or a temple or a mosque, and maybe you’re not Jewish or a Muslim or a Christian. But you might have a good experience by being there and being open to it.”