Many plants are harvested for their seeds, but turmeric, a sterile plant, can’t be.  Instead, it’s roots, or rhizomes, are gathered for all sorts of purposes.  First applied as a dye thousands of years ago in India, turmeric soon enough took form as a spice and as prominent component for curry powder.  From condiment and coloring, the rhizome naturally progressed as a cosmetic.  It doesn’t stop there as a pigment or powder; turmeric is also a highly-regarded herb in Ayurvedic medicine.

Turmeric can be used both internally and externally.  It adds a gorgeous golden tone and dishes to drinks, but that yellow tint can also linger on your skin when the spice is used as a first-aid ointment.  Don’t let that scare you off, though!  Turmeric is highly regarded for its health benefits.  If you were looking to hire a spice for all sorts of ailments, you’d be highly impressed by turmeric’s CV.  Turmeric would be the cream of the crop!  Or, uh, to be more technical, the powder of the root!  Curcumin (not to be confused with cumin), a compound found in turmeric, is highly responsible for turmeric’s extensive curriculum vitae. 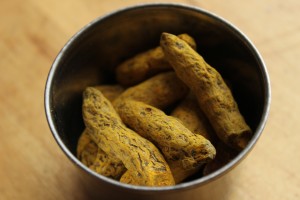 Lots of “anti” activity in that list.  But “anti” in all the most positive ways.  For instance, when you have an infection, whether it be a scratch, bug bite, or virus, your body’s go-to response is the inflammation route.  It’s the biological response to trying to remove the problem.  Aarthi Narayanan, a guest on The Kojo Nnamdi Show back in September, talked about how omnipresent turmeric has been throughout her life, and how she often uses turmeric for external inflammatory ailments.  When she had a bug bite, she’d use turmeric with coconut oil as an ointment, and she said everything would be fine the next day.  There’d be no infection, just some yellow residue on her leg.

You don’t need to ingest too much turmeric to get its benefits, just half a teaspoon a day.  Turmeric has it’s proper place cooking, but you’ve got to use it in the right manner.  It walks a fine line between bland and bitter.  Too little won’t do too much, and too much will be a bit bitter in flavor.  That’s why other spices are often paired with it, like cinnamon, cardamom, and cumin when making curry powder, for instance.  Another guest on the Nnamdi show, Monica Bhide, came to the thought that, “people use it in cooking primarily as a healer more than for any taste”.  Perhaps.  What’s the harm really in adding this golden spice to your life?  It seems to have accumulated a lot of credentials over centuries, and future discoveries of its capabilities wouldn’t be surprising, either.