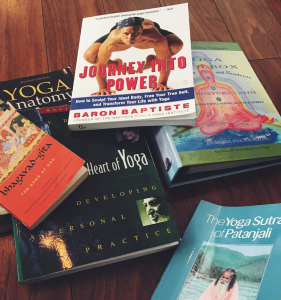 More months had past since the end of the classroom portion of Yoga Teacher Training (YTT) than I had originally planned. As with most other tasks, the YTT requirements were taking longer than I anticipated and delays between the tasks had eaten up time as well.

I had tried scheduling my own class in a park near home and posted it to yoga group on Facebook. Of course I chose a place close to me at the time most convenient to me. Not enough people were interested though. I rather envied some of my classmates who seemingly had endless amounts of friends who always wanted to take Yoga classes. So I would take a deep breath and remind myself they had to deal with other issues that I probably could never guess.

My second plan was to teach on my vacation when I would visit my parents. I asked my Mom who also practices Yoga for potential places to teach community classes. She asked some people and came up with several potential places.

My first class was in a studio that had volunteer staff and asked only for donations from the students. The studio was downtown where parking could be difficult, but also was over a Health Food Store giving good convenience for self care and also good energy.

Practicing my Yoga at Yoga District, it always takes some mental adjustment for Yoga classes in my parents community. They live in a place popular with retirees. So in my preclass greetings I made sure to go around and ask about issues. Some of the students told me some of the issues they had. I mostly had to stick with my response “not to push it or do anything that makes you feel too uncomfortable.” I wasn’t going to provide any hands on assistance and I was hoping they would understand their own limits.

Standing in front of a class with students you don’t know is probably intimidating for most first time teachers. I certainly felt the pressure. I started with some breathing exercises. This probably helped me relax at least as much as it helped them. I brought my guitar and went through the Chakra clearing exercise accompanying the C Scale. I had a moment of self-consciousness, wondering if they’d think I was too “hippy-dippy” for performing this exercise. Still, I was in a rather progressive area in a Yoga Studio, so it couldn’t be too far out.

I started the asanas with a Table series then moved into one of my more preferred series for Level I Yoga, Integrated Moon Series. About 15 minutes into the class a Yogini rolled up her mat and started to leave. I inquired if there was a problem. She said she wanted more of a “Flow Class”. I had become somewhat more comfortable by that time in the class. At this point a student was now rejecting my teaching style. Fortunately I’ve had several experiences in Leadership and Group Organization. I have come to learn from those experiences that pleasing everyone was not only improbable, but rather something of an impossibility. So someone not liking what I was doing somehow was more normal than not. I had survived the rejection. It was not a big deal, and I became calmer after that.

As class went on, I would check in with some of my students when they weren’t getting into the final asana. They would affirm or tell me perhaps something new about their health issues. I had to let go and let them perform their own practice.

I got to the end of the class without any other major incident. While talking with some of the class in the post-class time, I received a comment that I did hold the asanas a ‘long time’. Though this same Yogini said another instructor had held the poses too short a time to experience them.

For the second class I taught at a Community Center with the Senior services wing. There was one student who was a staffer and probably in her 30s. The others were Seniors. One or two had some experience in Yoga. The last one had little experience which was years ago.

With this class I really needed to keep the asanas within their range. As such we kept it almost exclusively on the mat. We started with gentle neck stretching, then side stretching, forward stretching, table and locust, Dhanurasana , Ustanasana, and Bridging. I tried conditionalizing may of the asanas with “if you are able to”, “if this works for you”, or “if you can do this without straining yourself”. Dhanurasana was challenging to one, but instead of it hurting, she ended up laughing which brought some levity to the class.

Our class room had a couple of doors and several people were coming in for lunch that day. This made for several distractions, but it was manageable. I was prepared to do a few more asanas, but with the impending lunch, I had to cut class a few minutes short.

My third class proved the most challenging and also to be a study in patience in chaos. I signed up to teach an after-school program for kids. The staff had gym mats lined up in the second story room. I could hear the children coming long before I could see them. I wondered how this was even going to work as they numbered over 30. Surprisingly, about a third raised their hands when I asked how many of them had taken Yoga before.

I would talk about the pose while demonstrating. I would give a few adjustments while teaching, but the student to teacher ratio was too large for me to give much personal attention. Their ages were about 5 to 12 giving a wide distribution in growth and maturity. While most did try to do the asana, several gave up and laid down. A group or two would have some sort of talking circle and may do some of the asanas at their whim. If the noise level rose, I would have to talk louder over them. I started to shorten my explanations and move on to the next asana as quickly as possible.

Hopefully a provided a somewhat meaningful or at least entertaining portion of their afternoon. I doubt I’ll never know if I planted the seed for future Yogis and Yoginis.

I wasn’t able to schedule all my classes while I was visiting my parents. So, when I returned a classmate suggested teaching at Libraries organized by With Love DC. I signed up for a couple of teaching slots.

My fourth class had a few students in it. One was a Senior and hadn’t practiced since her grandchildren had moved out a few years ago. She spent only a few minutes practicing before deciding that she didn’t want to continue. I asked if she had access to the web so she could try self practice before trying to come to another class. She said she had DVDs with Yoga classes and she was not the ‘giving up’ kind. Hopefully, she will continue her practice.

The rest of the class went well. I returned to the Integrated Moon Series. The small size allowed for lots of time for me to observe the individual students. I was able to give a good amount of personalized adjustments. The feedback was positive.

I taught the fifth class in the same library a week later. The student body was different and the finicky Metro trains made me late. I was a bit disappointed that none of the previous class came back, but this allowed me to teach the same routine without boring anyone. With the same surroundings and the same routine, I was able to feel the most comfortable teaching. While leading the second Dhanarasana I demoed, and the students followed in rolling a little for and aft and then rocking left to right. This produced one of my favorite reactions: smiles and laughter. The students gave positive feedback.

In the end of my first five Community Class teaching, I would say I still have a tinge of envy for those who could teach their friends for all their Community classes. As often happens in life, the more challenging events teach us more and allow for more growth than a more comfortable path. I had to learn to adapt to different ages and abilities. I also had to adopt to new classrooms and distractions. In the end, trying to make the class work for the majority of the Yogis is the best a teacher could do.