Why Yoga Studios are Shoeless 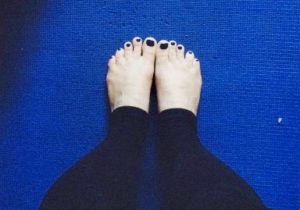 You enter a studio, take off your shoes, and step onto your mat. With a deep inhale and relaxing exhale, you begin your yoga class. Have you ever wondered why it’s customary to practice yoga barefoot? Or the reason you remove your shoes when entering a yoga studio?

Read on to learn about the cultural, practical, and physical reasons that yoga studios are shoeless. 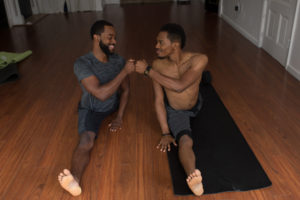 Shoeless yoga studios and practicing barefoot is part of yoga’s etiquette. When you do an activity, it’s not uncommon for a particular etiquette to accompany it. Etiquettes derive from cultural outcomes. Intent is to produce certain corresponding behavior in people. If you go to a bowling alley, then you will probably change into bowling shoes before hitting the lanes.

Every circumstance dictates certain norms and customs. When baking, you might don an apron, and when swimming you probably enter a pool barefoot. You might not even realize you are doing these actions. These behaviors become an automatic reaction to a situation. 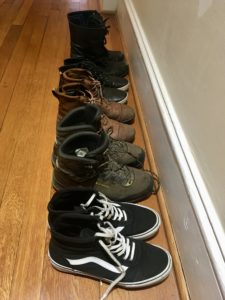 Corresponding etiquette to repeated activities become habitual learned behavior(1). Behaviors we consider common sense are actually learned norms and the knowledge of when they apply. Seeing a pool, cues you to take your shoes off before entering it to swim.  Eventually, removing your shoes when entering a yoga studio will also become as habitual.

If you try a new activity like yoga, then you need to be introduced to its etiquettes, such as practicing without shoes. At first this might seem unusual if this etiquette is contrary to your normal behavior. Outside the U.S., going shoeless in one’s home or in certain community spaces is a quite common custom. But, it is not as ubiquitous here in the US. Some people do not remove their shoes until climbing into bed at night! That’s several hours per day of shoe-wearing. Being ask to remove your footwear when entering a communal yoga studio, might seem like an odd request.

So why is being barefoot the accepted behavior in yoga?

According to Aparna, a Yoga District teacher, shoeless etiquette developed because of the birthplace of yoga. 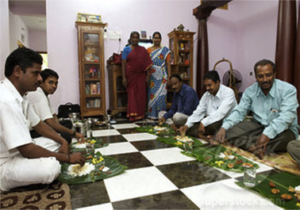 Much of the yoga as we know it today has its roots in India. It is a customary practice there to leave footwear at the entrance of a living space or a temple. It’s culturally seen as a mark of respect. It’s also a very logical way of keeping germs, that might have stuck to [soles of] shoes, from being brought indoors.

In many parts of India, people still sit on the floor, have feasts served there, take naps on it, etc. In fact, even to this day, many Indian households…wash their feet with water after removing footwear…before entering the house.

Now, in yoga there are so many poses like plank where we place hands on the floor. Avoiding walking indoors in footwear that’s been everywhere is a step towards hygiene in practice spaces. 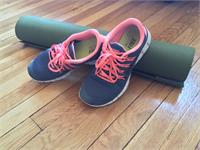 Shoes capture and carry dirt and make floors unclean(2). Imagine wearing shoes while you practiced yoga. Your mat would probably be filthy, and this would be an unpleasant experience when you are close and personal with it during certain yoga poses. Well, if the floor of the studio is also dirty due to shoe wear then you would have the same issue of a filthy mat.

This is another reason that yoga studios, including Yoga District, request the removal of shoes upon entering the studio. Regularly cleaned floors and available mat cleaner ensure a hygienic community space for people to practice. 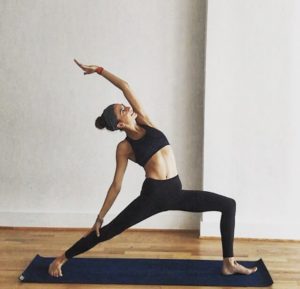 Aparna also notes the benefits of yoga being shoeless.

Walking barefoot..create[s] better awareness in the feet. This leads to an improved sense of: body awareness, posture, and gait as movement mechanics as opposed to walking in shoes which have padding. Being barefoot also provides for better grip in postures.(3)

From a physical perspective, practicing yoga barefoot gives you the feeling of stability and connectivity of your body to the ground, floor, or mat (4). This will help you in balancing positions and aids with alignment, ensuring you activate the right muscles(5). All of this will increase your understanding of your body. In yoga, you want to work with your body to build awareness and understanding.

Remember next time you enter a yoga studio, that shoeless etiquette derives from yoga’s Indian roots, hygienic reasons, and its physical benefits then relish in your practice.